Takehara, which means “bamboo field”, was known for its salt flats Up to the Second World War. Since it had salt to sell, the city’s merchants have flourished since the Edo period due to its salt production and connected activities. 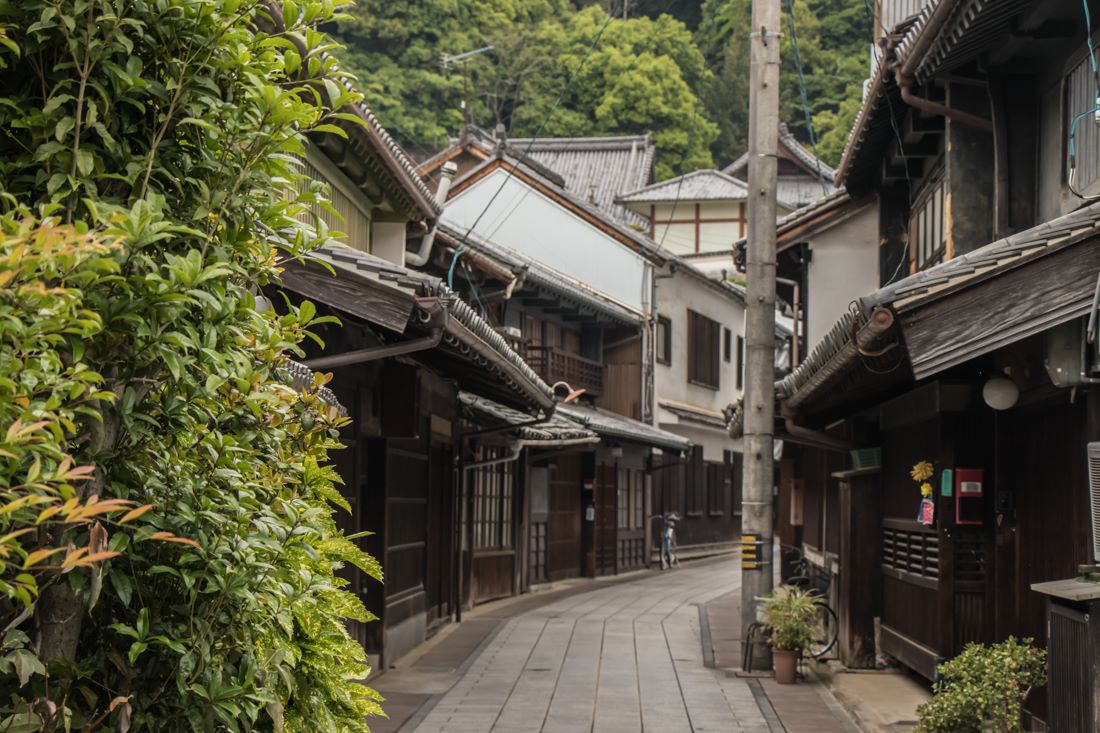 Part of the town has been preserved and the streets still appear as they were in the later Edo period. The big houses of Matsuzaka House or Yoshii House still stand on Honcho Street and you can see the curious and unique architectural style there.

Sanyo Rai, a Confucian scholar, and Masataka Taketsuru called the “Father of Japanese whisky” were born in the town. 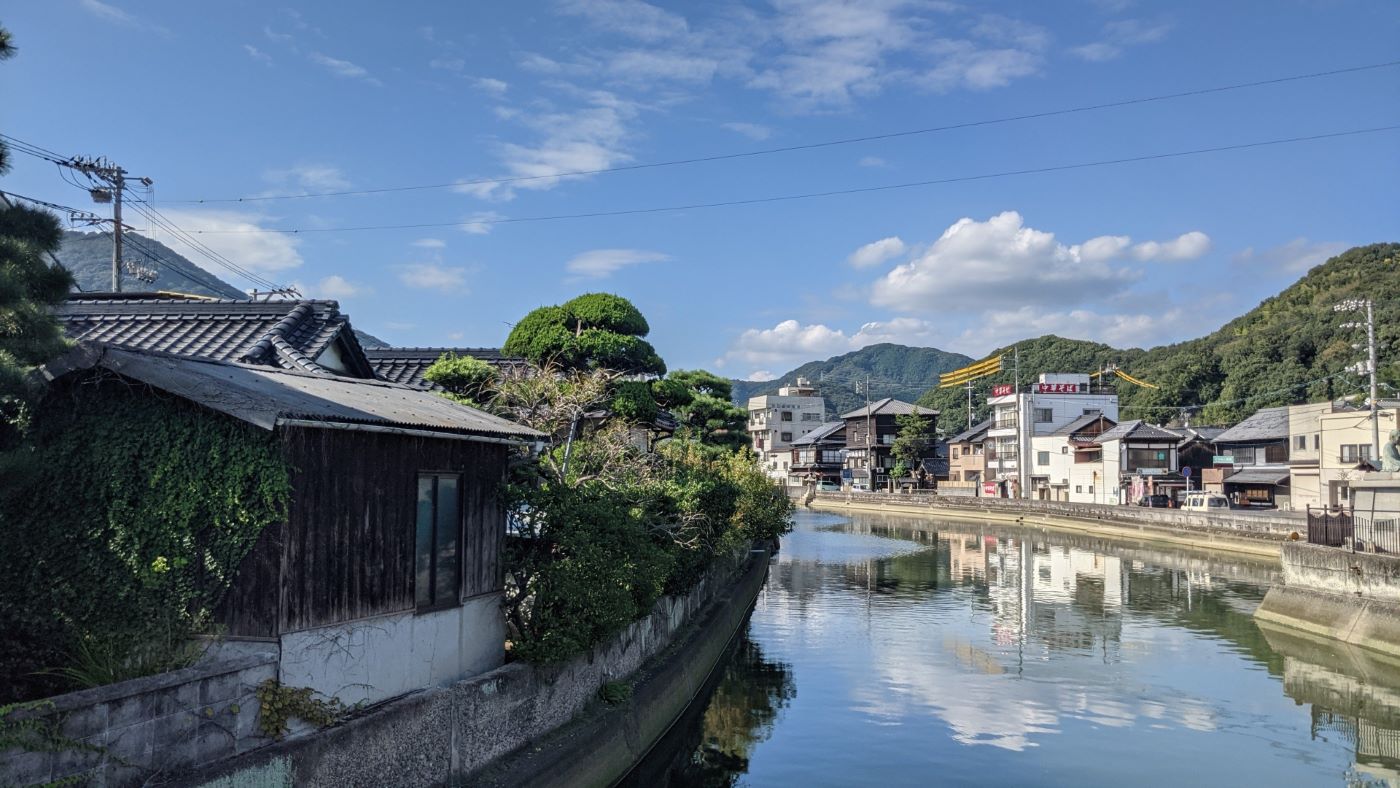 If you take the Kure train line from Mihara, you will travel along high cliffs overlooking the scenic Seto Inland Sea while rounding a sort of peninsula. Since it’s only a distance of about 30km, we recommend taking the local train.

Unlike the bullet train, you can have a leisurely ride along the coast, and in the early spring cherry blossoms will be blooming on the station’s platform, lending it a picturesque aspect. 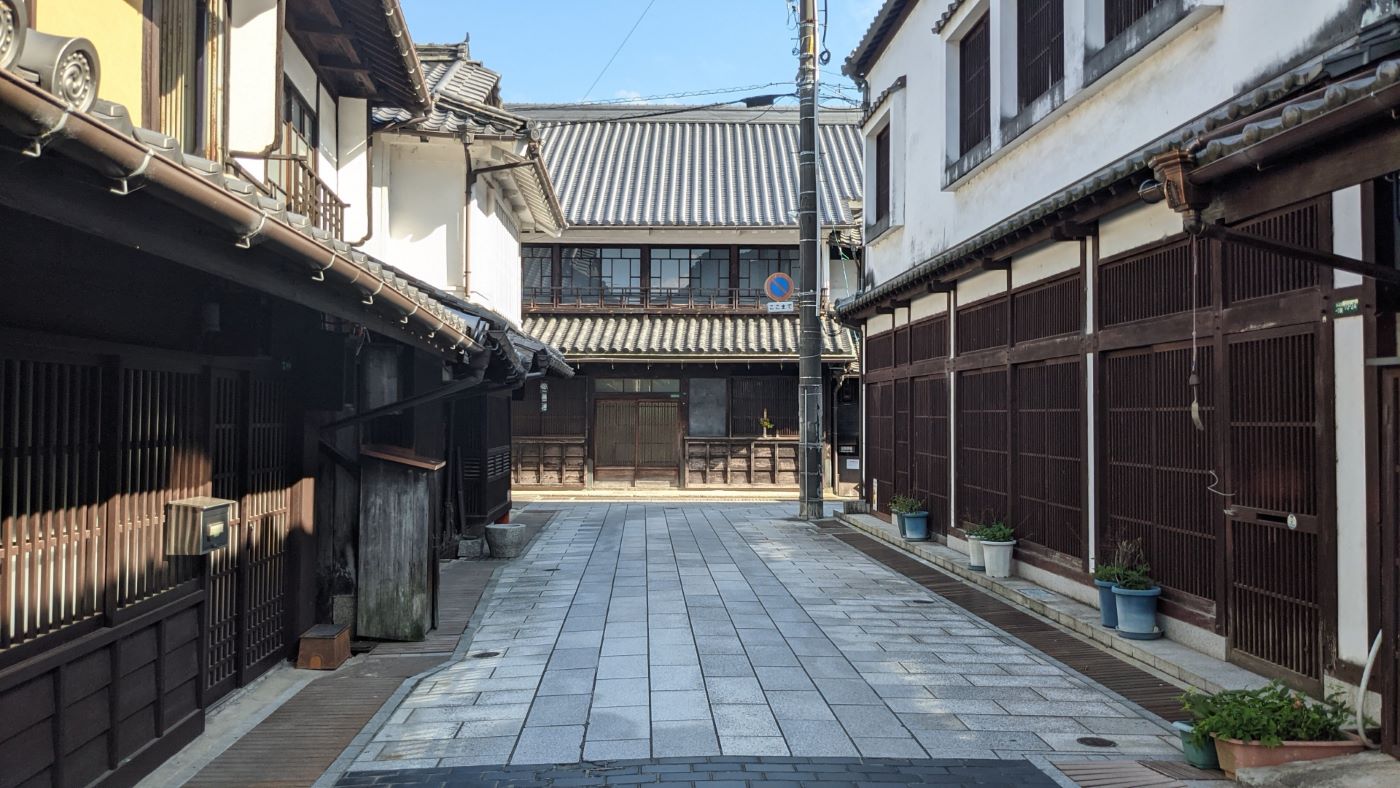 slip in the Edo period In Takehara

Today, Takehara is mostly known for its well-preserved historical district (Machinami Hozon Chiku), which has many old houses, some dating back as far as the 1600s.

The district is so well preserved and authentic that it is used as a set for many Samurai and Edo period dramas and movies. 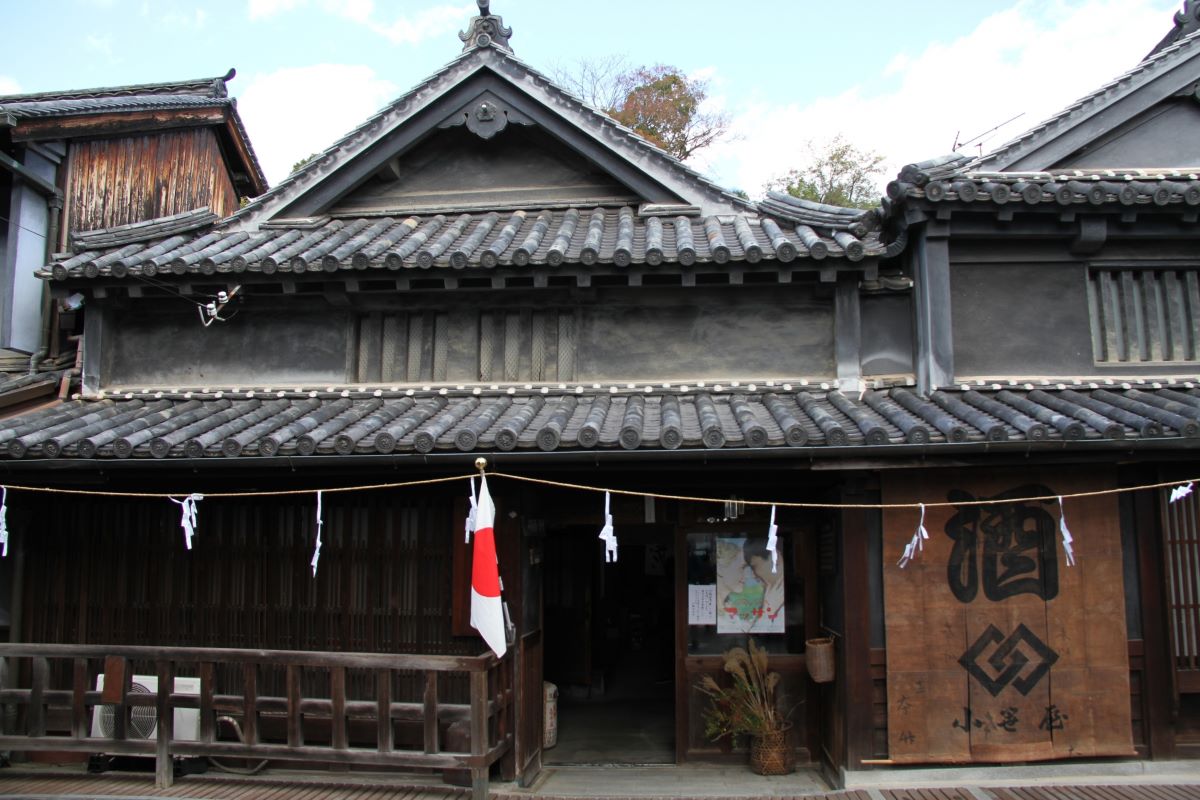 In the center of the district is the Preservation Center, which is air-conditioned and free of charge. Here you can see a slide show about the city and its history among other things. There is also a museum of History and Folklore.

Yusaka hot spring valley is in the northern area of the city. Okuno Island of vacation village entirely is in the Seto Inland Sea. 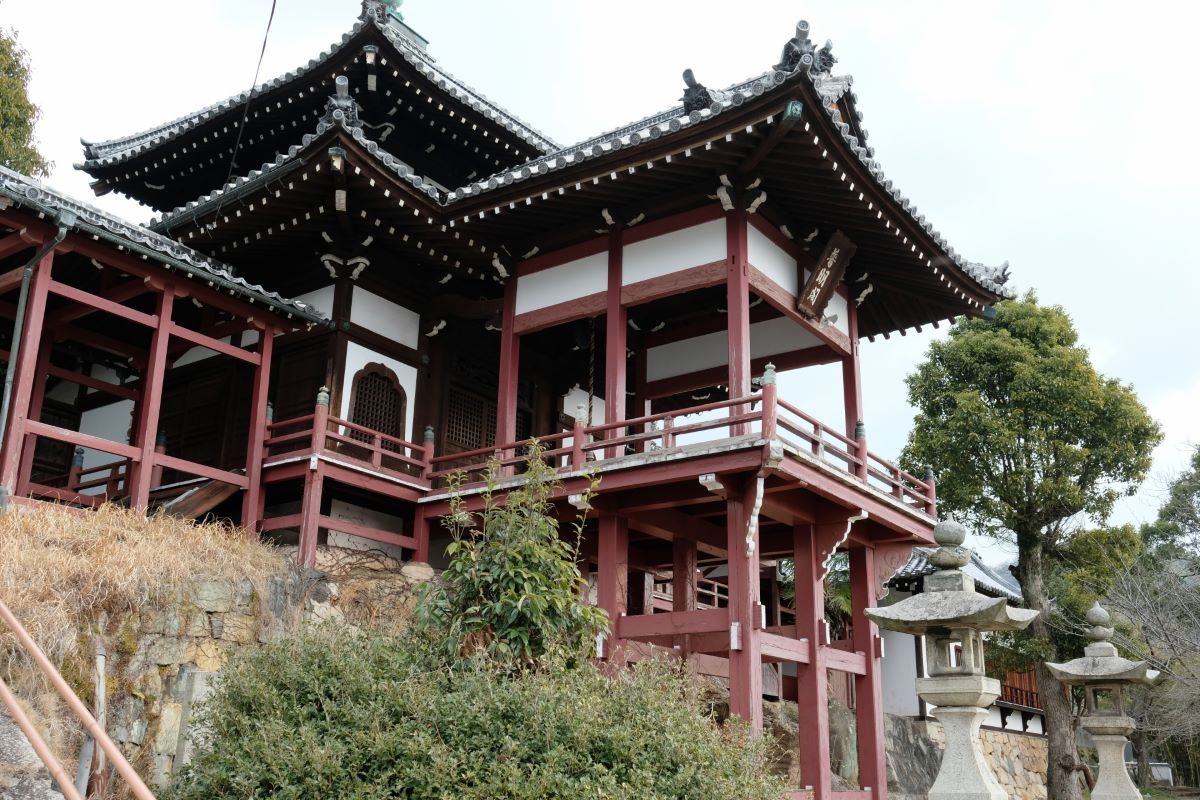 Takehara is full of temples and shrines worth seeing. Probably the most famous is Saihoji Temple, which is reached via a long staircase. If you travel further up the stairs you’ll come to the beautiful Fumeikaku Temple, which was modeled on another temple in Kyoto. 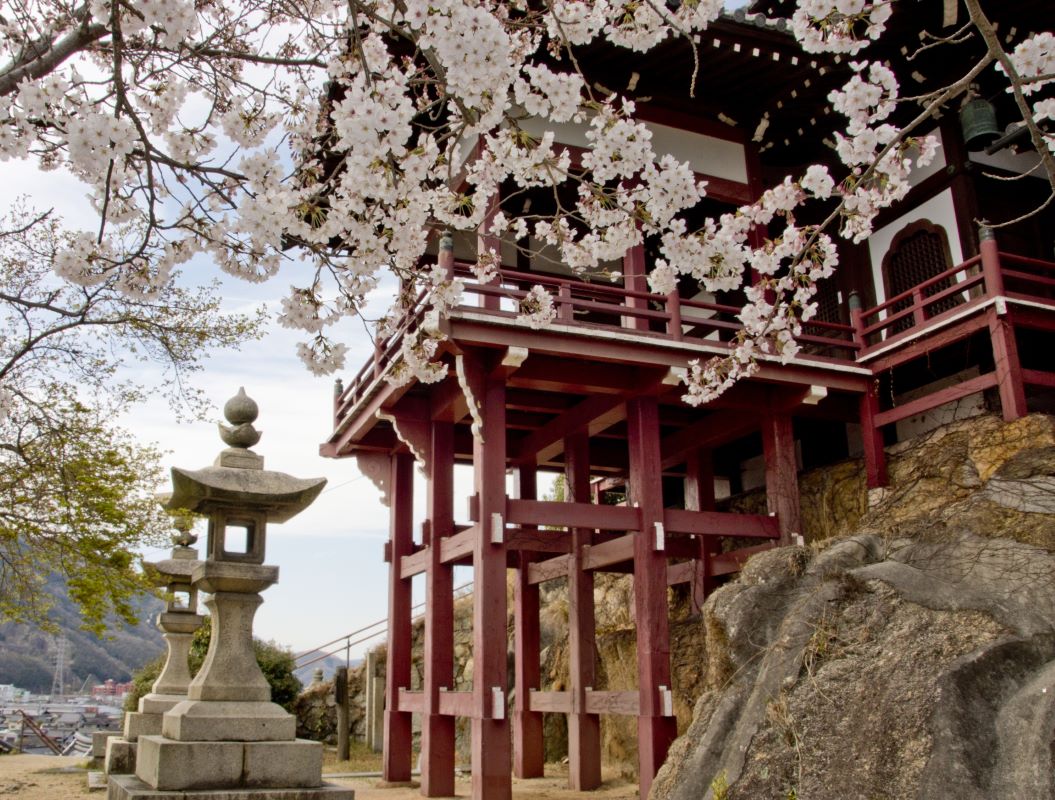 There are some very scenic views of the city from here, as well as places to stop and catch your breath! 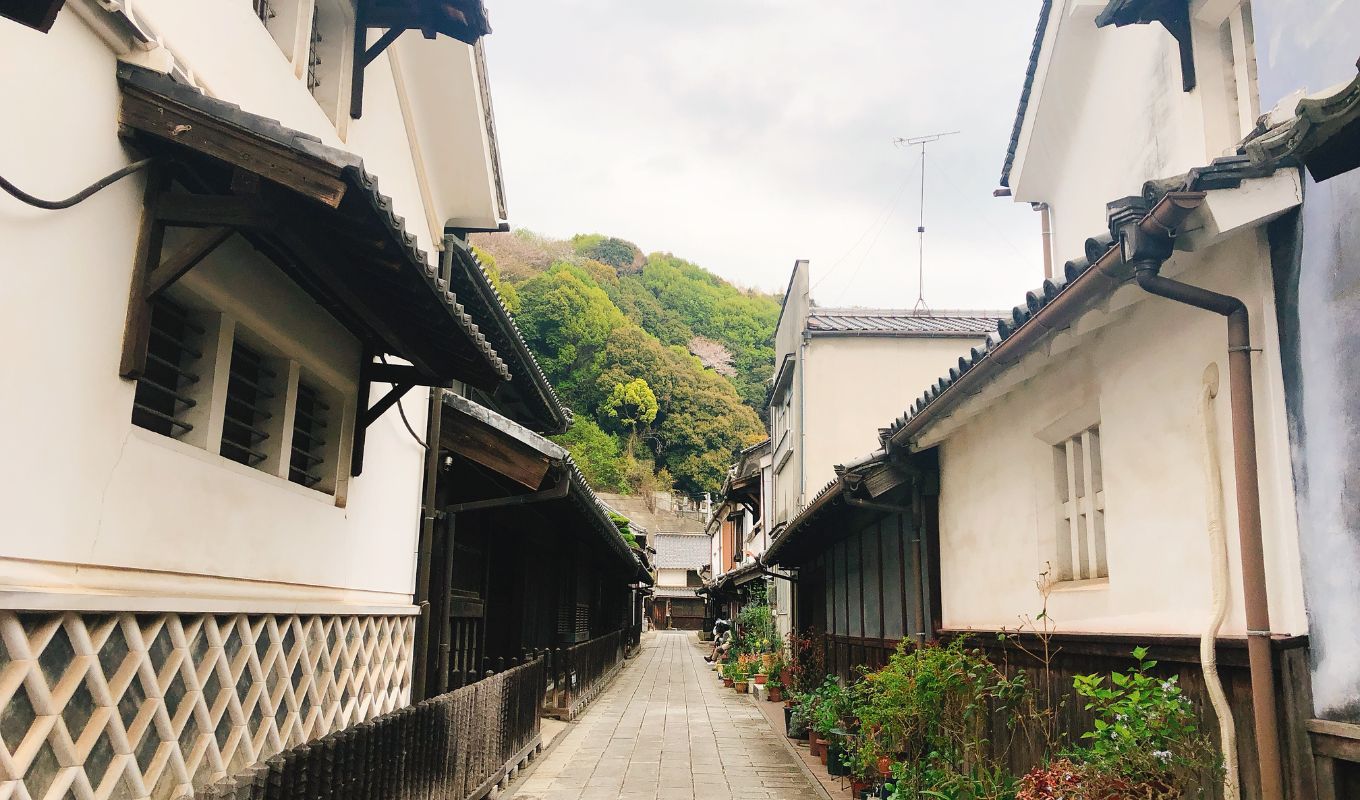 Along with making salt, Takehara has also been a sake brewing locale for centuries. If you visit here and like sake, try going to the Fuji Sake Brewery. Originally used as a storage room for sake, it has been remodeled into a tourist attraction and is free to the public.

While you’re here, of course, you’re welcome to sit down and have some of the local products. There is also a sake museum of sorts, showing brewing implements and various sorts of cups.

Taketsuru, as it’s called, has been in the sake business since the early 1700s, so they know what they’re doing. As with the Fuji Brewery, visitors are welcome to sit down and buy some rice wine to slake their thirst. 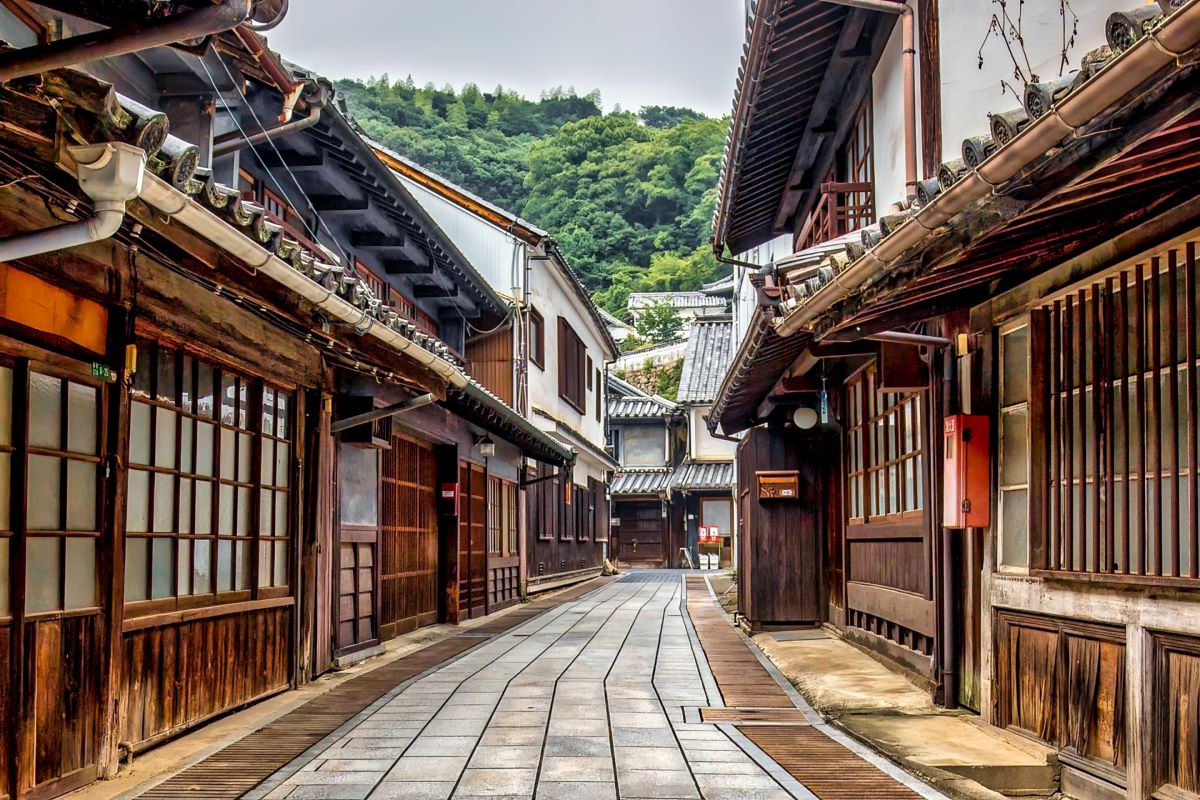 The first generation of the Matsusaka Family moved to Takehara from Hiroshima in 1674 and started running the firewood and coal wholesale business, which were essential goods in Shiota.

The Matsusaka Residence has its unique taste, especially in Takehara’s townscape. The building used to belong to the end of the Era (1820) and was comprehensively reconstructed in 1879.

The residence has kept the same shape until now. The unique wavy large roof with”teri and mukuri”, the moss green colored plaster coating under the roof, the Okabe-tsukuri, the hishigoushi patterned bay window with the nurikome window frame, the gently curved lean-to with the tiled roof, the engraved projecting lattice and the Yorikikoshi placed onto the weather-boarding of the facing shop.

It is a gorgeous architectural design. The design of rooms consolidates a tea-ceremony house.

In 1992, the Takehara Art Museum was opened in a part of the Takehara Godo Building. Under the will of Hayato Ikeda, who was born in Takehara and served as Prime Minister, his beloved art collection was contributed to this museum by his family.

The museum displays the Ikeda collection by replacing the exhibits a couple of times a year.

Among the Ikeda collection, you will find more than 150 art pieces of his legacy along with some adornments. They include the writings of the Confucian Sanyo Rai who lived in the late Edo era and was associated with Takehara, Hogai Karino, Taikan Yokoyama, Tsuguharu Fujita, Sotaro Yasui, and more.

The museum consists of the 1st floor which functions as a multipurpose cultural creation hall and the 2nd floor which holds the permanent exhibition and is made up of the art gallery and the Ikeda collection.

As Takehara is known as”Bamboo town Takehara”, the museum has a bamboo garden courtyard to create a relaxing atmosphere.

In the early Showa era, the Takehara Museum of Historical and Folk Materials is a western-style building that was built on the remain of”Takehara Shoin” which was built in the Edo era.

The history of Takehara started from the late Jomon era. It then developed in the Yayoi era and the Kofun Period. In the Tsurei time, it became”Akinokuni Numatagun Tsugou”.

In the Heian period, it became the manor of Kyoto Shimogamo Shrine and Takehara’s Kobayakawa Family took an active part in the medieval period. In the Edo era, tradesmen who became wealthy through the management of Shiota pursued learning under the influence of Genroku culture.

Thanks to Raiichimon who made his career by learning, the Takehara culture became known in Japan. This museum exhibit the resources of Takehara’s history, culture, and folk with a central focus on the historical resources associated with Shiota to make people recognize the historical flow and the common folklife in Takehashi. 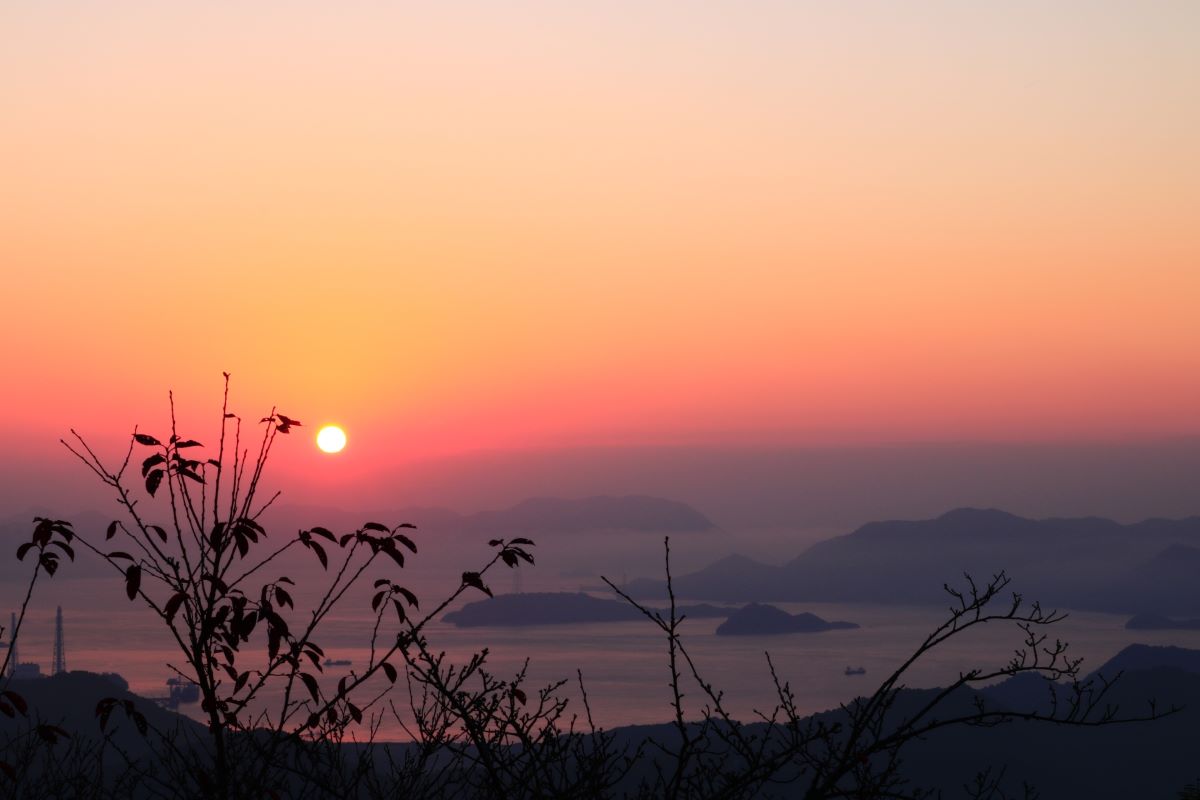 Sunset Over The Seto Sea From Takehara

Mt. Kurotaki, a symbol of Tadanoumi town, is at 266 m elevation with the fascinating-shaped stones rising from it. As it has a Kannondo and 33 stone Buddhist image, you will have a magnificent view from the trail up the mountain and atop of the mountain.

Just under your eyes, you will see Okunojma, the Geiyo Island chain, the Shachou Bridge, the Tatara Bridge, and even the far-off Shikoku mountain ranges.

The Kannondo located atop the mountain was said to have been built in 730 by the priest called Gyoki.

The Juichimenkannon statue is said to be a masterpiece found in the Kamakura era. On New Year’s Day, many visitors enjoy climbing the mountain for the first sunrise of the year. 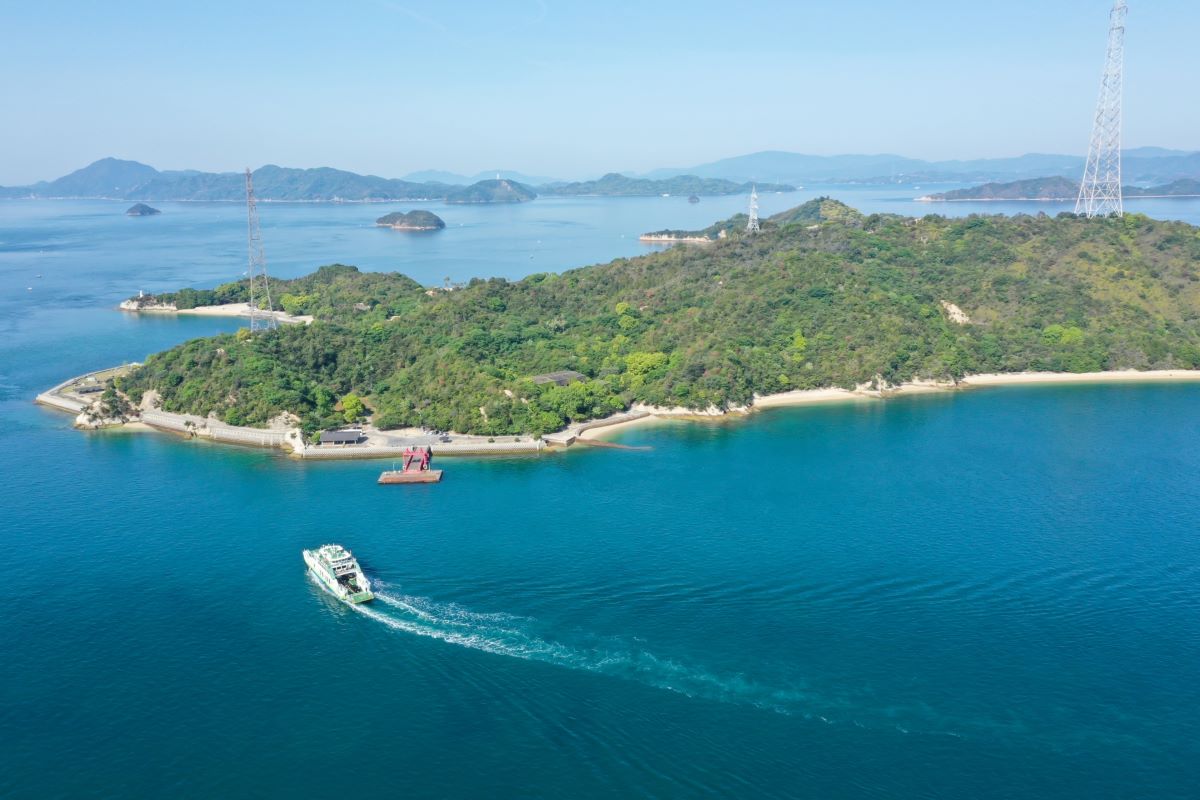 Okunoshima is a little island that is a bit off the Setouchi Shimanami Sea Road which goes between the islands in the Inland Sea. The entire Okunoshima turns out to be a resort village. Enjoy this island resort of approximately 4km which you can only reach by ship.

The viewing hot spring is a great attraction in which you can see the setting sun of Seto. There are facilities provided in the main building such as restaurants, camping sites, beaches, tennis courts, rental bicycles, and pools. The whole island has a peaceful atmosphere.

As Takehara is the town of bamboo, you can also participate in a newly started hands-on program called “Bamboo Washi Making Hands-on Craft Center” to make traditional Japanese paper with the material of 100% bamboo.

This is a Japanese typical steam bath by having algae bedded in the cave of Tadanoumi Miyatoko seashore. It looks like a sauna as its frame is rocks. There is two baths that you can choose from; 60 – 90ºC and 40 – 60ºC. You need to put your swim suites on for mixed bathing. You will find the Miyatoko beach close to the bath. As an inn is just next door, you can enjoy having fresh local fish caught in the Island Sea.