6 Places To Visit In Okayama 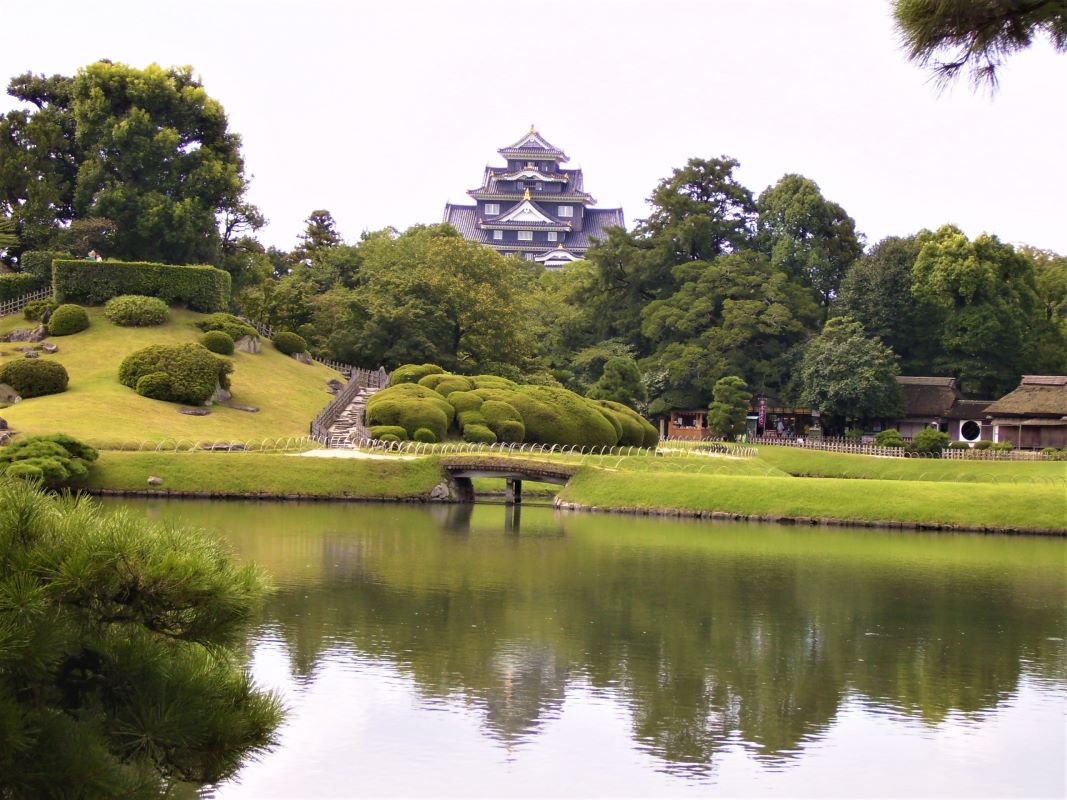 Black Crow Castle and Korakuen Garden are the symbols of this cultural and historic town. “Land of Sunshine” is endowed with a warm climate.

The central city is a castle town with rich cultures You can enjoy the old shrines/temples and streets It was the original place of ancient Kibi culture and has flourished as a castle town under the Ikeda clan’s governance of 315,000 koku.

There are the Okayama Castle called “Crow Castle” and the Korakuen Garden, one of the most famous gardens in Japan along the Asahi River which flows in the center of this city. Unique museums such as “Yumeji Takehisa Museum” and “Orient Museum” are scattered near them. In the suburb, there are the Kibitsu Shrine, the streets of Ashimori, and Saidai Temple which is famous for the “Naked Festival”.

Towns in the peaceful countryside on the Kibi Road The folk tale of Momotaro fighting off devils traveled The place where Sesshu was born and grew up. Now the five-story pagoda overlooks the Kibi road There remains a legend of Ura in which Momotaro tale originated.

This city is the center of Kibi Kingdom in ancient times. The “Kinojo Castle” in the northern area of the city was told to be adobe of devils. In the countryside where the ancient burial mounds are scattered, there is the Bicchu-Kokubunji Temple with a beautiful five-story pagoda and the Iyama Houfukuji Temple with a famous story in which Sesshu drew a mouse using his tears. Many people visit the “Kibi Road Lotus Festival” in spring.

In the Edo period, it became the territory under the direct control of the Edo government, then many warehouse mansions were built. It is said that is why this town was named “Kurashiki” (meaning warehouse mansion in Japanese). “Bikan Chiku (legally designated fine sight area)” keeps the old town scene where you can enjoy the beautiful street moats and row of houses with white walls.

This is also an artistic area where the Ohara Museum of Art and many galleries are located. Nostalgic townhouses stand side by side in Hommachi and Higashimachi. You can look out over Seto Ohashi Bridge, enjoying various beautiful island views in Kojima facing the Seto Inland Sea.

The original place of Bizen-Ware to attract the masters of ceremonial tea, Inbe town has a 1000-year-old history and many chimney pipes for kilns with stepped chambers It produces simple but elegant ceramics.

Inbe town is a ceramic town that has been actively producing ceramics for a long time ago. Many potteries and galleries are scattered on the streets in this town. The “Bizen Ceramics Museum” stands next to JR Inbe station, which shows the history of Bizen-ware.

There is “Sizutani School” which is the oldest school for common people established by Mitsumasa Ikeda, clan lord in the mountain area. You can enjoy the fresh seafood and the scenic beauty of many islands of the Seto Inland Sea at the Hinase port.

“Little Kyoto in Bicchu”, which was developed by the pure Takanashi River A castle town in the mountain area in the foggy weather in the river Let’s walk in the beautiful mountain castle and on the street of the castle town You should visit the “Nariwa in Fukiya”. The castle town in the mountain area has been called “Matsuyama” until the Meiji period. The Bicchu Matsuyama Castle is built on Mt. Gagyu dominating the east area of town. There remain the old street scenes in the castle town and the samurai residences and tradesmen’s houses. You should visit the “Konkawasuji” where the rows of cherry blossoms and willows are lined near the river and the Rikyuji Temple with a beautiful garden. There are Fukiya, a mining town that has flourished by Bengara and the luxurious Kokentei House in Naniwa.

Scenery and old towns remind you of the Aegean Appearance of an old port waiting for the wind/tide to turn The Ushimado Bay from the olive hill called Aegean in Japan A port town about which the tanka is composed in a Collection of a Myriad Leaves. This town is called “Ushimado Senken”, where the Korean embassy was entertained as a sea route of Seto Inland Sea in the Edo period. The central area of town has lots of remnants of the Edo period. The hill overlooking the town/port is the olive garden. The yacht harbor is prepared in the port. So you can see the scenery reminding you of the Aegean. So it is attractive as a resort because of art activities.