Things To Do In Onomichi

Onomichi is a pleasant town on the Seto Inland Sea, one of many in the Chugoku region. Defined by the Onomichi Channel – a narrow strip of water that runs between the main island of Honshu and Mukaishima in the inland sea – and steeped in more than a millennium of history, it offers travelers access to both the islands of the inland sea and other cities in the area. 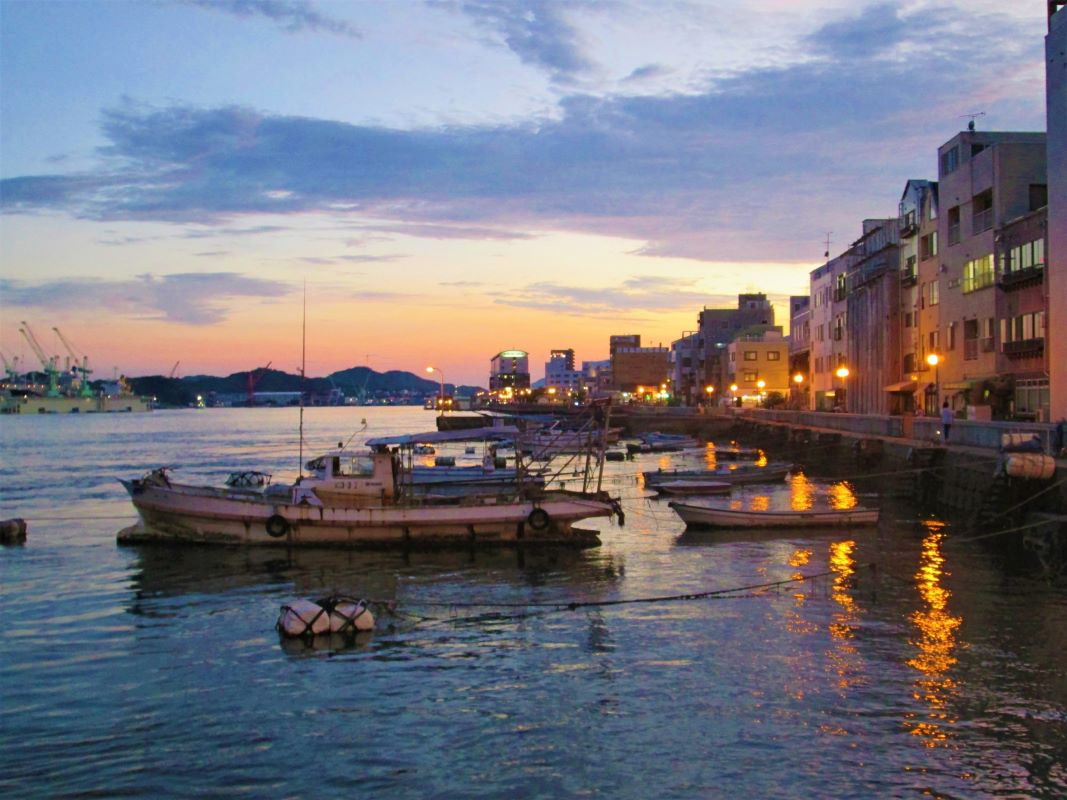 Although Onomichi has easy access by train (it is a stop for Kodama-type bullet trains), there are cruises that one can take that show much more of the region. The area of the inland sea near Onomichi is studded with hundreds of islands, making the scenery very memorable.

But if you can’t take a cruise for whatever reason, try taking the ropeway to the top of Mt. Senkoji where you can see the entire city and much of the sea beyond. A hundred and forty meters (about 450 ft) high, this low mountain also has a park on its side. In the spring, over 10,000 cherry trees bloom, covering the area in pastel pink.

The Onomichi Municipal Museum of Art is also located within the park. Onomichi is well known among Japanese artists for its inspiring landscapes, and this museum has a good collection of local works. At only \300 for adults, it’s a good way to get a feel for the local culture. 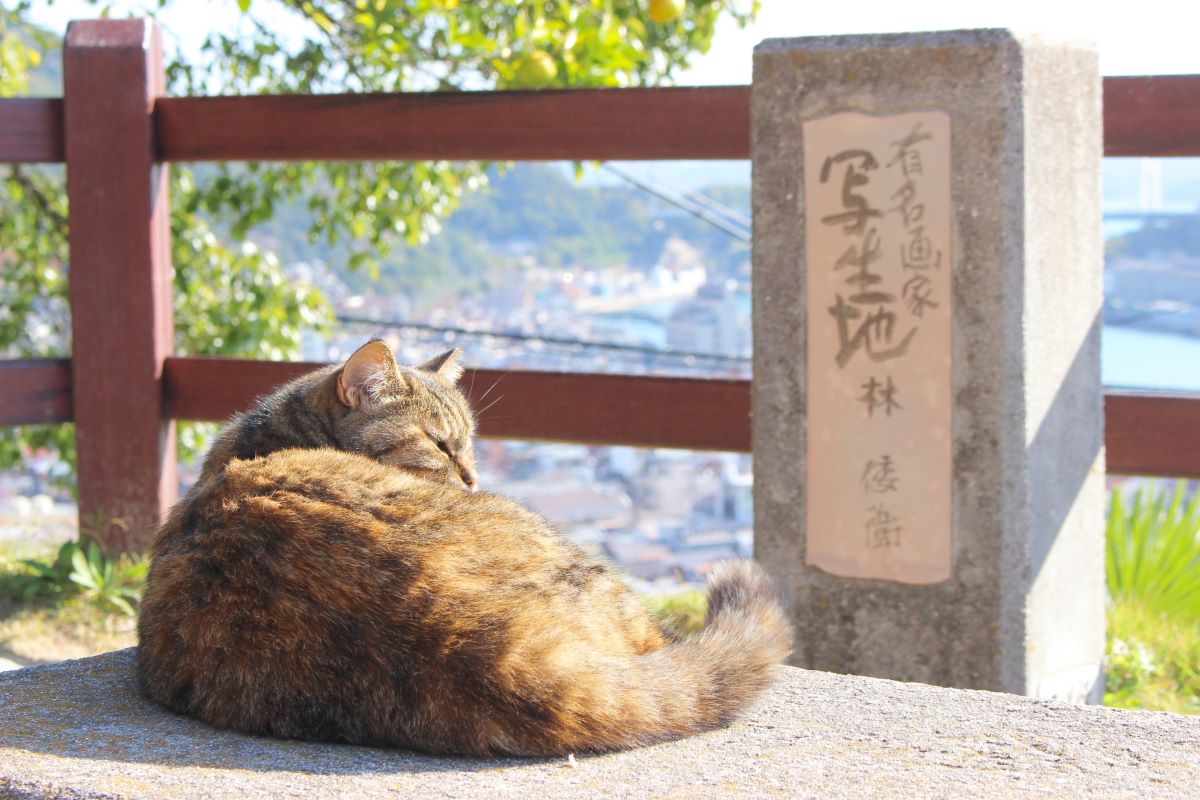 Aside from great views, Onomichi has its famous “temple walk”. The town was spared from damage during the war, and this walk will show you a collection of 25 Buddhist temples, the most famous of which is Jodoji.

A trove of enormous historical significance, Jodoji’s main hall, and the two-storied pagoda are designated as national treasures and the gate and Amida Hall as important cultural assets. Saikoku temple is also interesting, with gigantic straw sandals (over two meters in length!) hanging on the gate. 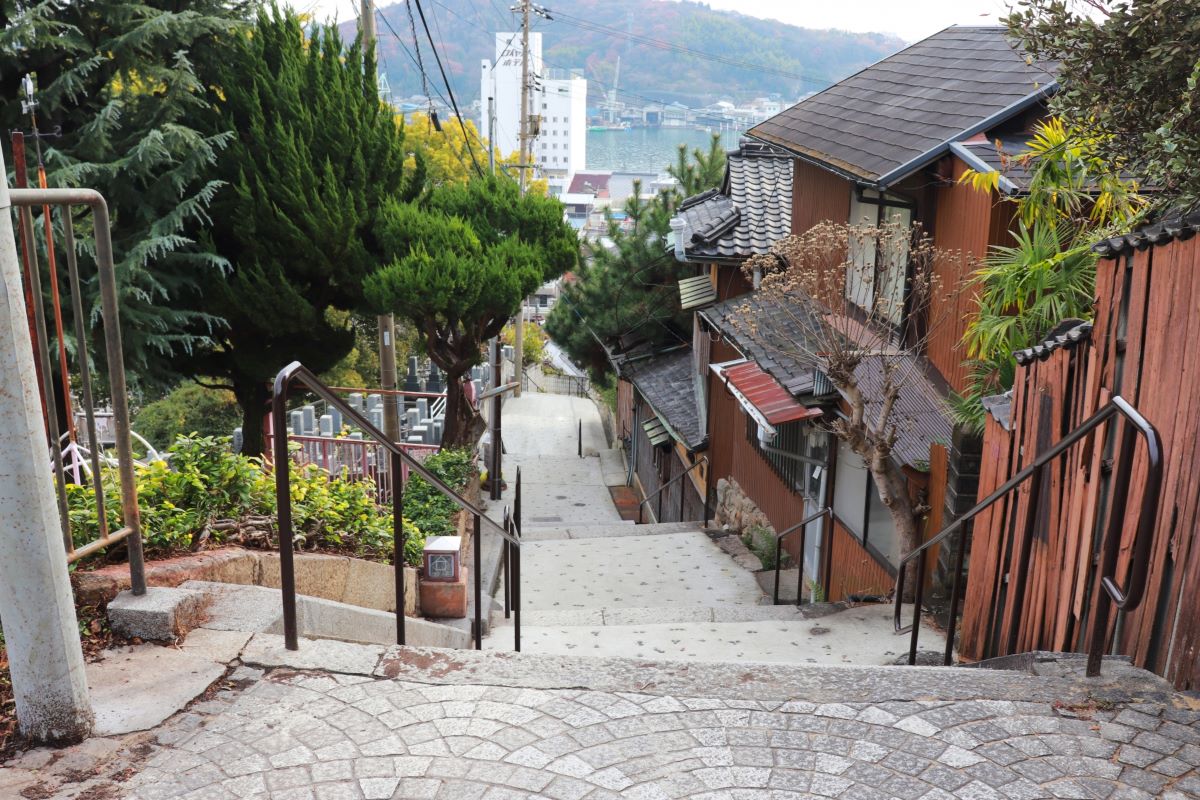 This town is located along the narrow Onomichi-suido and has been developed by marine transport since old times.

There is the Senkoji Temple behind the urban area. The narrow slope roads lead to the temple. There is the landscape that attracted the novelists such as Fumiko Hayashi and Naoya Shiga there. Many people visit the old temples such as Senkoji Temple and Jodo Temple, the “Literature path” to route the literature monument or literature museum, and also locations of Obayashi works recently.

When you drop off at Onomichi Station and take a look back, you will see a small mountain. This is called Mt. Senkoji at 136.9 m elevation. The Senkoji Park stretches out from the halfway of the mountain to the summit.

You will see cherry blossoms and azalea in spring and purple and pink colored wisteria in the early summer. In autumn, the Onomichi Chrysanthemum Competition is held and the park looks more vigorous with the beautiful smell of chrysanthemum. In the park, there is also the Onomichi Municipal Museum designed by the internationally acclaimed architect Tadao Ando. You can have a panoramic view of Onomachi city as well as the islands found in the Island Sea from the observation deck atop of the mountain. You will even see the far off Shikoku mountain ranges when the weather is fine.

The Senju Kanzeonbosatsu, a principal image of the Senkoji-Temple, which is rarely shown to the public, is called “hihuse no kannon sama” as it protected Onomichi city by the huge fire that occurred in Kurihara village in 1705.

From the ancient times, it has been said that after one’s mind is washed up by the beautiful view from this temple, which many famous poets acknowledged as one of the best in Japan, and then he/she makes a wish for the principal image, a good luck would come to him/her. There are many visitors, irrespective of age or sex, who come to the temple to pray for a good match, pass an exam, bear a child, traffic safety, cure an illness, the well-being of one’s family, long life, and senility prevention.

It was November 1912 when Naoya Shiga moved to Onomichi. He left Tokyo where he felt awkward about the way his book called “Shirakaba” stood and he was on bad times with his farther. He moved into Onomichi to which his friend gave a compliment.

His residence in Onomichi was “at the very end of three tenement houses” as exact as he once described in his book called “Anyakoro”. His apartment was very humble with a six-tatami room, a three-tatami room, and a kitchen. You will see the remains of the shipyard and the quarry on the mountainside behind the Onomichi Sea.

The Jodoji-Temple is known as a National Treasure temple including “Tahoto” and is one of the most traditional temples in the Chugoku region.

The Juichimen-kanzeonbosatsu, which is rare to be shown in the public, is sometimes called “Migawari-kannon”.

It is famous that Takauji Ashikaga prayed for good luck in the battle of Minatogawa and won it. The enshrined “wishing stone” used belongs to Kyugoro Jinmaku, the grand sumo champion in the Edo era.

It is believed that if you could turn around the stone while you are making a wish, you will have good luck.

Other than ridding bad luck or better luck payer, the temple also offers safe delivery prayer (abdominal bandage giving) in the year of the dog. Accordingly, there are many visitors who are pregnant.

The Nakata Museum of Art has various types of permanent exhibitions. The feature of this museum is that you can enjoy looking at numerous masterpieces at the same time and in the same place.

The collection contains the paintings of Japanese masterful painters such as Ryuzaburo Umehara, modern painting masters including Pablo Picasso and Georges Rouault, painters of Ecole de Paris, and representative contemporary French painters such as Paul Aizpiri and Pierre Chirstin.

Although the museum normally runs the permanent exhibitions, it holds special exhibitions of not just a tour exhibition but of its own project once or twice in a year, which have been successful.

The Onomichi Municipal Museum of Art is located in Senkoji Park. It was re-opened in 2003 by the internationally acclaimed architect Tadao Ando.

The feature of the appearance is the simple concrete and grass wall on all sides of the building, which provides brightness to the museum. Special and project exhibitions are occasionally held.